JUST EARTH: Singing for Justice, Peace, and Sustainability on our one and only planet! 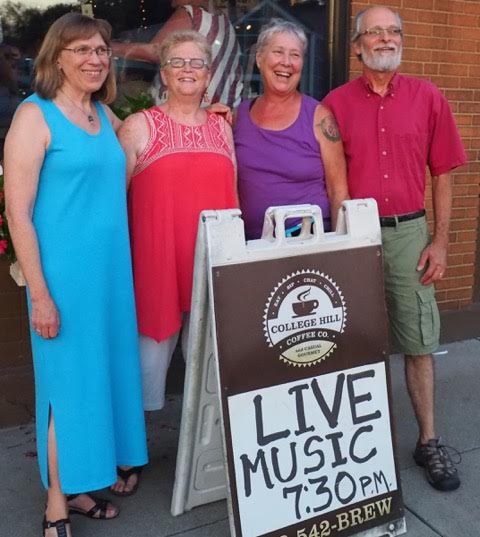 Singers like Pete Seeger, Joan Baez, Holly Near and so many other great performers who sing about what they believe in and about what's going on in the world have always inspired me.  In the 1970's, when enough people helped me realize that I had a good voice and could sing, I began using it to sing out in the same tradition as these beloved  movement singers. With the help of friends along the way, I've enjoyed singing and leading songs at hundreds of gatherings since then, from labor picket lines to rallies for the homeless, from Occupy movement demonstrations to anti-war protests. Through it all, I've witnessed the important role that singing has in the long struggle for social justice.
My most recent outlet for providing "music with a message" was with the group "Just Earth."  Jamie Fota, Len Webb, Diana Porter and I made up the group, with other musician friends stepping in now and then. Jamie, a fellow Quaker, is also a lead singer, songwriter and guitarist, who's resonant voice and energetic rhythms enliven audiences. She has recorded several albums, including "Out of the Silence" (https://www.amazon.com/Jamie-Fota/e/B000APN9C6) and "Willow Morning."
(https://www.reverbnation.com/willowmorning)  Len is a a former music teacher who plays trumpet, keyboards, harmonica and percussion, while also providing vocals ranging from bass to tenor(!), and Diana is an all around accomplished singer and musician, known in Cincinnati as a founding mother and influential leader of the MUSE, Cincinnati's Women's Choir, who frequently provides arrangements for our songs. Our CD, Just Earth: One Planet, One People, One Future, was released in Jan. 2017, featuring mostly original songs by myself and Jamie, but with a few great cover songs that also speak to compelling issues, including climate change, the need for a local food economy, and the struggles of poor and working people. Please listen to the samples below and consider downloading or purchasing a copy!
FACEBOOK Page
"Just Earth" Album is now available to order digitally or by CD.
Site designed by Jon Watts ©2015 Paulette Meier